Paradise Block by is a collection of short stories by Alice Ash.

‘Paradise Block opens a series of nicotine-tinged curtains and peeks into bedsits and kitchenettes, onto naked bulbs and balding sofas. This set of interwoven shorts provides a hyper-real, saturated colour view of urban living in high-density housing, exploring the landscapes of Clutter and Plum Regis, locations that are at once rooted in the familiar and recognizable, and yet seem strangely surreal and dream-like. Within the collection, the block itself acts as a physical barrier between characters who are living in ironically close proximity, while experiencing a chronic disconnect. Each story is linked to the block in some way, with recurring characters, such as John Dodd, the block’s caretaker, and an emotionally deficient and negligent father and husband, seen here in “Planes,” “Ball” and “John’s Bride,” and Min Dimorier, an alienated elderly tenant who has sacrificed her identity to care for others, and whose story is explored in “Eggs,” “Complaint,” “Hungry” and “Sea God.”

The collection constructs an insular and claustrophobic world that reflects and filters contemporary experience as if in a dream, or a distorting mirror, shifting between different warped and unreliable accounts and influenced by magical realism and mythology in its exploration of the line between tangible and intangible experience. There is a focus on ‘bodily outsiders,’ those who are removed from homogenized ‘norms’ and thus rendered invisible. “Doctor Sharpe” and “Black, Dark Hill” explore the sexual appetites of two women, with the former foregrounding ageing sexuality and both presenting the struggle to remain sexually ‘seen.’ In “Eggs” a little girl finds her body changing in more ways than one when she takes on the cooking responsibilities in her household, and in “Hungry,” “Sea God” and “My Children” domestic labour is also centred. “Complaint” is set within the department store that dominates the job force in Clutter and encapsulates the collection’s interest in consumerism, while also casting a surreal eye over the power dynamics of zero hour contracts and the insouciance of corporations.

Working within the constraints of a boundaried community, in this case, a tower block, has allowed the collection to consider the physical limits, such as walls and ceilings, and those less tangible ones, such as the power dynamics between classes and genders. Thematically, these shorts focus in on urban sameness and mundanity, whilst exploring the vulnerabilities attendant on unstable identities, naked individualism and self-deception. Paradise Block looks at the missing communications between men and women, husband and wife, parent and child, and most importantly, between actuality and desire.’

‘We were married on a Tuesday, when John was in full health and the sky was murky, white and pink, like the soft belly of a speckled rodent … There was no sadness on this treasured day, except when we left The Brass Cross, and John fell down onto the floor and ripped a small part of my yellow-white dress.’ 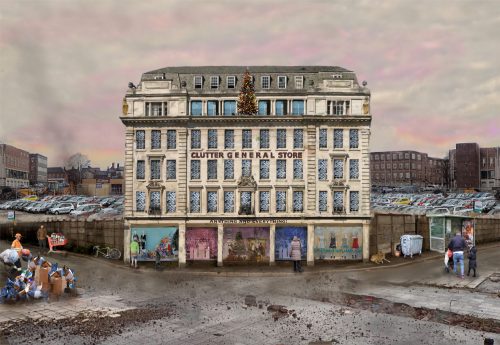 ‘The land adjacent to the department store is barren because of the footfall and traffic surrounding it; there is nothing except the car park and the bus stops, two lanes of traffic, one to deliver shoppers and one to take them away … a vast white whale-fish with silvery window scales … ‘